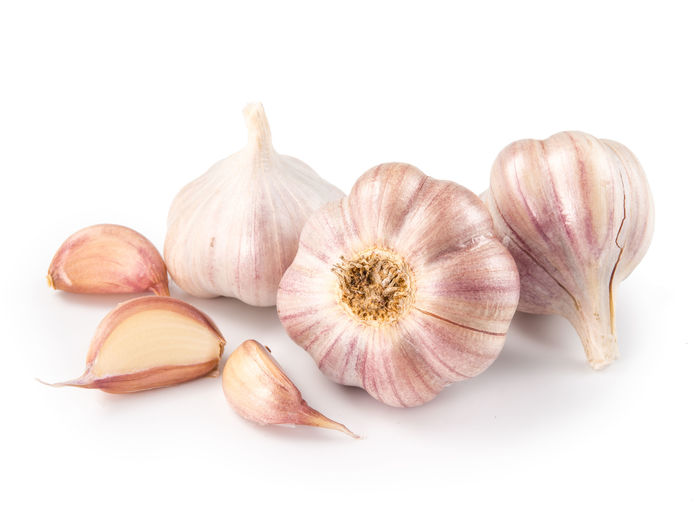 Herbaceous plant from the Liliaceae family, perennial, with white or cream coloured secondary bulbs known as garlic cloves. They are very aromatic and they are clustered on a discoid stem and covered by scaly translucid yellow-whitish membranes, which make up the head of garlic.

Garlic growing is very ancient, going back to Prehistoric times. Its strong taste was considered miraculous and was used both as a medicinal plant and in cooking. It originated from Central Asia, from which it spread to other parts of the world later to be used in most cultures. In ancient Egypt, the slaves that built the pyramids used to consume large quantities of garlic to protect themselves from many ailments and the biblical scriptures talk about their consumption by the Hebrews. It has been of common use in Europe since the Roman Empire and it was already used in India and Asia before the Europeans arrived.  It was also introduced into Africa and America during the Colonial times. In the First World War it was used for disinfecting wounds when conventional antiseptics were scarce.

Garlic properties are mainly based on the sulphuric components it contains (allicin, allil, /diallil sulphides). Garlic has been found to have many health benefits such as its antiseptic and anti-inflammatory bactericide, antiviral, antifungal and intestinal antiparasitic effects.  “In vitro” studies have indicated that garlic extract, even in low concentrations is a great inhibitor for Helycobacter pylori, the bacteria associated with gastric and duodenal ulcers.

"A Banda" style rice with monkfish

Artichokes and prawns warm salad with a mix of vegetables

Avocado and mayonnaise pintxo with prawns

Veal flank in its own juice

Chicken fricassé with paprika and spaghetti

Chickpea cream with pork and cuttlefish

Espagnole sauce (as a cream sauce)

Green sauce made with fumet

Green sauce made with vegetable stock

Grilled perch with vegetables and couscous

Grilled plaice with vegetables and couscous

Grilled turbot with vegetables and couscous

Hake fillets in a green sauce with clams

‘Kokotxas’ hake cheeks with asparagus and artichokes in green sauce

Leeks filled with monkfish, and spidercrab in green sauce

Macaroni with chicken and mushrooms

Oyster and cod salad with pil- pil and orange juice

Pasta with sweetbread and mushrooms

Piedmontese ragout with vegetables and risotto

Potatoes stewed with squid in their own ink

Rabbit seasoned with mustard stew and garnished with mixed vegetables

Rabbit seasoned with mustard stew and garnished with spaghetti

Rice and squid in ink

Rice in broth with cuttlefish and noodles

Rice with chicken, mussels and clams

Rice with mussels and squid

Rice with rabbit, clams and mussels

Roasted duck breast with mushrooms, chestnuts and fruits of the forest

Salmon with mushrooms and prawns

Scrambled eggs with spinach and mushrooms

Scrambled eggs with squid and mushrooms

Squid stewed in their own ink

Stuffed peppers with squid in its own ink

Stuffed peppers with squid in its own ink

Turbot stuffed with vegetables and served with clam sauce

Veal cheeks seasoned with Pedro Ximénez and garnished with vegetables

Veal fillets with chips and mushrooms

Veal fricassee with chilli and potatoes

Veal ragout with mustard and mixed vegetables on sticks

Veal ragout with mustard and potatoes

Vegan lasagna made with soy protein crumbs and ratatouille